Feel the Wrath of the Super Rad!!!

And if we die before the battle's through, tell your mom, tell your dad we were super rad!
-The Aquabats (Super Rad!)

"Super Rad" was the first song I had ever heard of The Aquabats back in 1997 and I was instantly a fan for life. They are one of my favorite bands and I have seen them multiple time in concert. If you've never been to one of their shows I highly recommend it, it'll probably be the most fun you'll ever have at a concert.

Well because of a interview I did with the awesome site Blurppy.com I got the opportunity to do a poster for the Bats. This will be debuting at SDDC and will be available at the Toddland booth #3449. The Bats will be on hand at the booth Saturday July 14th from 11am  - 1pm for a signing and if any posters are left they will be available at their show at the House of Blues in San Diego later that night. Oh, and there will also be a Sandfleas Vandalized Variant edition, FYI: Sandfleas are one the enemies of the Aquabats. 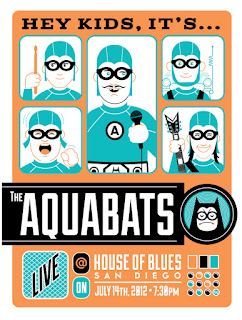 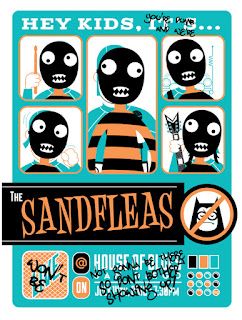 These posters are AWESOME and really capture the essence of the band. ANOTHER great job Dave.