I am doing a 1/1 commission that is now up for bidding on ebay.com. Please spread the word, it's for a good cause. Here's the link and all the details from the lisiting below... 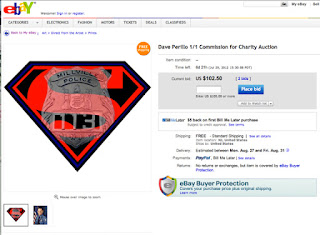 Up for bid is a one of a kind commissioned piece of art by Dave Perillo.

A few days ago I contacted Dave Perillo and asked if he would be able to donate a few existing pieces that we could auction off for the family.  Dave took it one step further and asked what I thought about auctioning off a commissioned piece, with the winner choosing whatever they wanted him to design.  Of course I accepted and was ecstatic that Dave would take the time out of his crazy schedule to do something like this for someone he did not know.
Winner will receive:
1 – 16X20 inch print on Archival Paper signed by Dave
1 – Hi-Res File of the designed art
Dave will do a commission of whatever you want (comic, movies, TV shows, your family dog…you name it*)
*With some limitations, so don’t ask him to draw every single Marvel character having tea with every DC character.  Try to keep your request to no more than 10 characters. Nothing explicit.
Please allow a few weeks for Dave to complete your art.  Remember, he is a very busy man and is taking the time to do this for a good cause.
at 9:51 PM