Beware the beast Man, for he is the Devil's pawn. Alone among God's primates, he kills for sport or lust or greed. Yea, he will murder his brother to possess his brother's land. Let him not breed in great numbers, for he will make a desert of his home and yours. Shun him; drive him back into his jungle lair, for he is the harbinger of death.

A commission i recently finished, had fun with this since "Planet of the Apes" is one of my all time favorite movies. Although General Ursus doesn't appear in the original film they wanted to include him in the piece, which is fine by me since he's awesome! 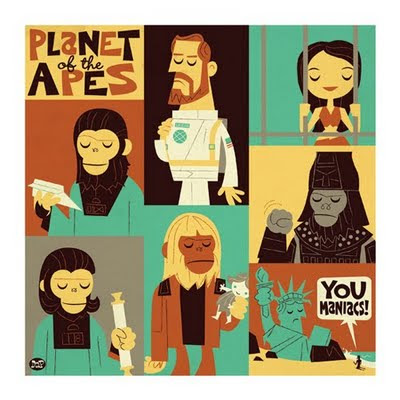 Also, anyone in the "Bean Town" area i'll be at the Boston Comic Con this weekend April 30th - May 1st in Artist Alley with fellow artists Scott Derby & Tom Whalen
at 10:04 PM

Holy crow, this is AWESOME. I'm a huge PotA fan. Any chance you'll be selling these prints somewhere?
Ryan
terminalscomic.com

Yes, this is an awesome piece. I would definitely purchase a print if it were made available.

Fantastic work! If you decide to sell prints, feel free to let me know, and I'll publicize it at my site, below.

Sincerely,
Rich Handley
Lexicon of the Planet of the Apes
Hasslein Books
http://www.hassleinbooks.com

Great illustration. I love the style and how you put the story elements together!

I really love snooping around on your blog. Your illustrations are bee-yoootiful