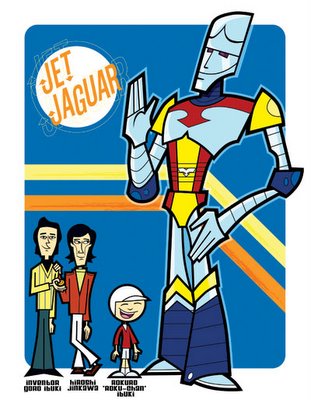 So about a year ago i was watching Godzilla vs. Megalon and i thought it'd be cool to do a cartoon version of the robot Jet Jaguar. I had this whole Hanna Barbera kinda cartoon in my head where the robot Jet Jaguar, his inventor Goro Ibuki, Goro's little brother Roku-Chan, & Goro's "friend" Hiroshi would have crazy adventures. The whole thing could be like a spoof of Johnny Quest where Roku-Chan would get into to trouble and Jet Jaguar would have to help him, or the gang would have to stop the evil plans of the people of Seatopia from attacking Earth yet again. Oh, and Godzilla and the Harlem Globetrotters could make guest apperances during sweeps week!
at 8:36 AM

Reading an issue of the fanzine G-FAN, I came upon your Jet Jaguar illustration and just had to visit your URL. Nice work you do! Ever consider drawing Godzilla and all his friends,
foes and characters in a series?